skip to main | skip to sidebar

Everyone who knows me knows I'm a huge fan of Target. This rabid retail condition was once identified as the Red Cart Romance and I've used that phrase ever since hearing it. About a month ago, my long-distance Red Cart Romance (which once upon a time used to be a monthly fix requiring a passport) became local as my love came to Canada.

While the Canadian Target experience is almost (but not quite) as fabulous as the U.S., it seems to be working to give me my Red Cart fix on a regular (weekly!) basis. I think everyone's read enough about the difference between the 2 different versions so I'm going to spare you the comparison.

Instead, let's talk about one of my favourite things about Target (aside from Archer Farms foods, Circo kids' clothes, and Sonia Kashuk makeup): The Designer Capsule.

On a limited time basis, Target brings in designer clothes at Target prices. Watered down versions but lovely nonetheless. This past Christmas, in the U.S., I nearly lost my mind over the Neiman Marcus designer section which featured Marc Jacobs bags, Rag & Bone blazers, and the most exquisite Oscar de la Renta dog bowls you ever threw kibble in. Unable to find a way to pass off the dog dish as a chip bowl, I settled for a wicked awesome Proenza Schouler sweatshirt that has kind of a Flashdance look to it.

The opening of Target Canada resulted in a Roots "designer capsule", which just didn't do it for me. It's watered down Roots products (really, watered down sweats? Really?) which was a nice nod to the Canadians but didn't satisfy my Red Cart Designer Lust.

Tonight, however, I noticed Kate Young has made a very quiet entrance into Target with her own capsule. No signage to point it out, but ever on the lookout for The Designer Capsule, my radar went off just past the Starbucks.

Lovely edgy evening gowns, flirty dresses, some 90's style see-through lace bodysuits, and some very sweet dresses. I snapped up a pretty, flirty springy dress that will be nice for work, a brunch out, or tea at Buckingham palace perhaps.

Here's a shot of the dress - I'm too lazy to try it on for y'all so I've Google-grabbed a pic instead. 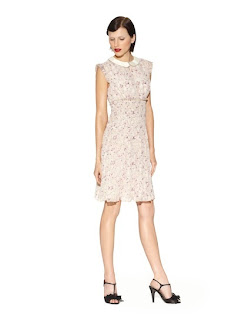 We'll let People magazine determine "Who Wore It Best" (me or this lovely model) but for $49.99, I don't mind if you run out and buy it to get in on the action as well. It also comes in black and white, but that's tricky to pull off for a spring/summer dress.

See you in People or at Buckingham Palace. xx
Posted by Elaine at 10:23 PM

Elaine
When I hit "the top of my game" professionally, I looked around and realized it was time to put some attention to other areas of my life and seeking balance. I'm proud of my professional accomplishments, but all work and no play makes for the risk of stress-eating, weight gain and health issues. I started 2016 in a 21 Day Fix Challenge Group and found support and positive changes. I also found my strength, lost weight, got healthier, and feel pretty bad-ass. As I continue on my journey to balance, staying strong and being accountable means helping and coaching others in my "off hours" as a Beachbody Coach. I'm also seeking balance through my renewed attention to my passions: * Cooking healthy foods * Wine (love!) * Thrifting (I'm a thrift store junkie!) * Laughing with family and friends * The great outdoors I'm also seeking balance through being present, better managing time (like pre-planning meals to avoid the dinner rush hour insanity), and getting organized. Come along, join the journey, let's have some fun seeking balance together!