skip to main | skip to sidebar

Yesterday I was sharing with some colleagues about how much I love my slow cooker. They confessed they only use theirs for the occasional soup and are afraid to cook anything else with theirs. As I shared the virtues of my slow cooker and promised to teach them how to cook a chicken dinner, it occurred to me this info might be helpful to others. So here's the dealy-o on why and how a lazy girl cooks dinner in a crock pot.

Every Wednesday night, Austin goes to Cub Scouts, and it's a mad dash from work to home to eat to drop him off and then turn around and pick him up later. Throw a toddler into the mix and cooking dinner in the midst of that equation is just not do-able. So, typically, on a Tuesday night I prep the food for the slow cooker and then all day Wednesday it cooks while we're at work and/or school.

Clean a whole chicken (rinse it out good!) and pat dry with paper towels. You can stick an onion or some garlic cloves or a cut up lemon inside it if you want. If you're feeling extra lazy, don't put anything inside. Put it in the crock pot. Cut up some potatoes, carrots, maybe some onions, and put them around the chicken in the pot. Pour barbecue sauce or any kind of marinade you like over the chicken. I like the maple-flavoured Diana's Sauce. Sprinkle herbs on your chick if you want. Splash some lemon juice around onto the vegetables and sprinkle them with herbs. My family likes Herbs de Provence on our veggies, so that's what I use. When you're ready to cook, just set the pot on low for 10 hours. That's it. That's the lazy girl dinner.

Here's a shot of what tonight's lazy girl dinner looked like before cooking: 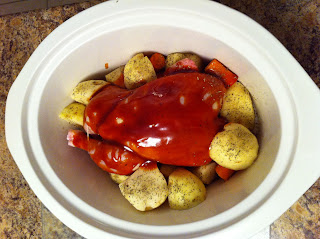 Some other tips for using the slow cooker: I like to set it cooking near a window and just crack the window open a teeny tiny bit. As much as I love the smell of dinner when I arrive home, I don't necessarily want the whole house reeking of it. A great tip from my friend/neighbour Russ: If your crock pot doesn't have a timer, just plug it into one of those timers that turns your lights on and off. Set the heat level to what you want (High or Low) and then set the timer for when you want it to end cooking. You can also get fancy and set it to start cooking at a particular time, if you want. Me, personally, I'm not keen on leaving food out not cooking til later. But I'm a germaphobe who wears latex gloves while handling meat, so I'll leave that choice up to you.

Final tip: Don't forget that you cooked dinner! I've been known to arrive home with an armload of groceries, gearing up to cook a meal, having totally forgotten I've been cooking dinner while at work. There's nothing like arriving home to a home-cooked meal, even when your lousy memory surprises you with it. Enjoy! 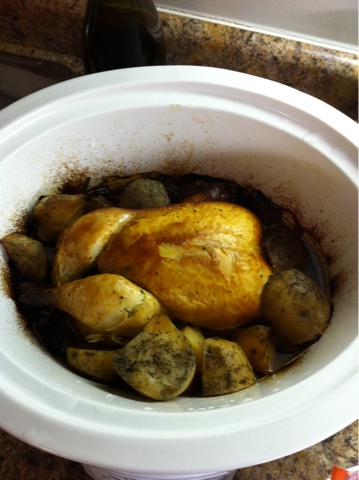 Elaine
When I hit "the top of my game" professionally, I looked around and realized it was time to put some attention to other areas of my life and seeking balance. I'm proud of my professional accomplishments, but all work and no play makes for the risk of stress-eating, weight gain and health issues. I started 2016 in a 21 Day Fix Challenge Group and found support and positive changes. I also found my strength, lost weight, got healthier, and feel pretty bad-ass. As I continue on my journey to balance, staying strong and being accountable means helping and coaching others in my "off hours" as a Beachbody Coach. I'm also seeking balance through my renewed attention to my passions: * Cooking healthy foods * Wine (love!) * Thrifting (I'm a thrift store junkie!) * Laughing with family and friends * The great outdoors I'm also seeking balance through being present, better managing time (like pre-planning meals to avoid the dinner rush hour insanity), and getting organized. Come along, join the journey, let's have some fun seeking balance together!